Mabe Pearls are large, hemispherical (dome shaped) cultured pearls that grow attached to the inside shells of oysters, rather than within its tissue. The pearl then develops in a hemispheric form, with a flat back.

While in the oyster a Mabe Pearl is actually considered a Blister pearl, not a Mabe pearl. After the blister pearl (also called a button pearl) has been 'worked' it then becomes a Mabe pearl.

For growing Mabes, a flat bottomed plastic nucleus is glued inside the oysters shell beneath the mantle tissue. After the plastic bead has been glued and the mollusc returned to the water, the mollusc then begins coating the nuclei with lustrous nacre, layer after layer of brilliant shine. Mabe pearls usually take around 9-12 months to culture after which the mollusc is harvested with each oyster producing an average of 4 - 6 pearls. Several different bead shapes can be used for the plastic nuclei. You will find Mabe pearls in rounds, drops, ovals, or hearts.

Mabe pearls generally are used in earrings, pendants or rings which conceal their flat backs.. 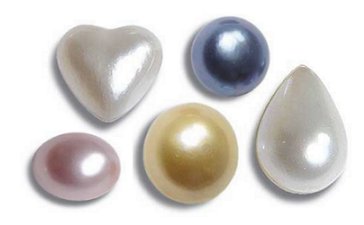